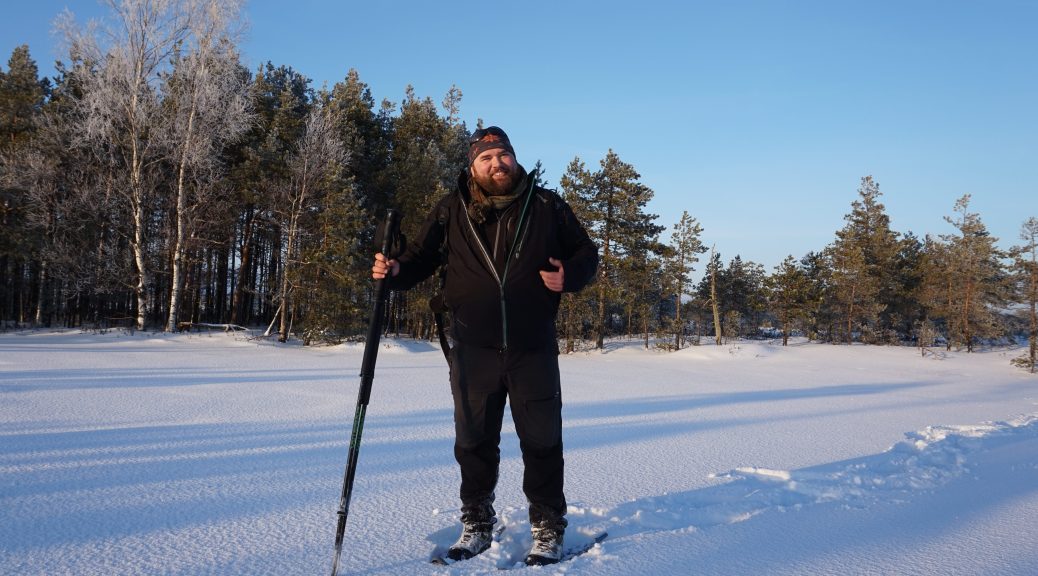 I have an idea for an alarm clock ringtone.

It’s the sound of pancakes being cooked on a Primus stove in an Estonian winter wilderness.

Would it get me out of bed ready for a commute to work? Probably not.

But it would make me want to get up and go back to Pärnu in Estonia.

Argo and his wife Elen run Seikle Vabaks (freedom of adventure), a company organising year round adventures on land and sea. It was the end of January and recent heavy snowfalls had quashed my ideas of outdoor skating. Instead, Argo offered to to take me on a hike through the wetlands near Pärnu.

But before we set off, Arno showed me some of the other things you can do in Pärnu, which despite being known as Estonia’s summer capital is a year-round destination. It’s shallow bay, which warms up nicely for the surfers in the summer, freezes over in winter opening it up to winter sports. Unfortunately, while I was there recent snowfall meant that only the ice fishermen were out – a popular attraction for Latvians from the unfrozen Gulf of Riga. In spring and autumn, Pärnu Bay also becomes something of a Mecca for bird watchers during the great migrations.

While we were there, we witnessed the rare treat of an ice halo, which is rainbow made of fine ice crystals. Who needs Photoshop when nature does it for you.

Our next stop was Pernova – a nature exploration centre, principally for the local children but everyone is welcome to come and learn about what to see and do in the wild. Argo runs the forest school activities there.

After this introduction, it was time to make our call on the wild. We drove to the edge of the Pärnu wetlands at Kilksama. After donning our rucksacks filled with provisions and strapping our snowshoes on top (we would need these later) we set off.

The snow we trudged through told the recent history of the place or at least what had happened since the previous fall of snow.

One person must have been on our path along with a dog which had deviated here and there to sniff and mark. A rabbit had also been hopping passed at some point.

As we continued, these tracks disappeared and we headed across a barren land that had been harvested for peat and which had an almost glacial beauty. When we reached the wetland, we put on our shoe shoes. This was partly for our convenience and safety but also to protect the plants we may inadvertently walk on.

As we progressed through the wetlands, Argo would stop every now and then to prod the ground with a long spike. Although it seemed at random to me, he was actually checking the ice when we were nearing the edge of a bog, or lake, as this is where it is most likely to be weakest to walk on. Argo explained that where trees grew in clumps, that was dry land. The smaller plants we saw were actually trees whose growth had been stunted by wetter ground and the areas where no trees grew at all were the bogs. Now the landscape beneath the snow was starting to make more sense.

We stopped by some woodland and set up the stove by hanging it from a tree. Whilst the Argo started cooking pancakes, my job was to make some kissel from a packet. It’s a sweet fruity gloop that was ideal rib lining on a cold day.

As the sun lowered, it was time to head back but not without taking a moment to reflect on what a beautiful place we had been in.