Cities aren’t the most pleasant places during heatwaves and Budapest is no exception. So it was a relief to wander into the cafe/bookshop Massolit a spend a couple of hours in its shaded garden.

Massolit (the name of the literary society in Bulganov’s classic The Master and Margarita) is stacked high with books in English, French, German – all seem like gems.

With books everywhere, there’s just enough room for a counter which is filled with cakes and a coffee machine. The #IstandWithCEU sticker in the window shows where the people here fit on the political spectrum. The Central European University was recently hounded out of Hungary by the government.

I picked up a book on the politics of Transylvania which is where I was heading next and made for the garden round the back.

Judit, who looks after cafe, came out with some gardening gear and looked at the rampant herb patch.

‘I need to sort this all out today’ she sighed.

She saw the book I had bought and asked me what I thought of it so far. We then talked about the Transylvanian problem.

After the First World War, the Austro-Hungarian Empire was carved up into a series of new countries and formalised in the Treaty of Trianon in 1920. Over a million Hungarians who lived in Transylvania found themselves now living in Romania.

99 years later, with both Hungary and Romania being part of the EU and their citizens having the freedoms that go with it, surely this should all be water under the bridge?

Apparently not. As prime minister Victor Orban put it at a recent rally to commemorate Trianon: ‘while time heals wounds it does not heal an amputation’.

On Alkotmány Street, which leads up to the beautiful Hungarian Parliament, preparation is underway to build a 100 meter long memorial etched with the names of the 12,000 municipalities that had been in the Hungarian part of the Empire and, to quote one journalist, ‘torn from the motherland’. The monument will contain an eternal flame which will be sunken below ground so that it always burns below the surface. Whatever the metaphor, I’m sure the homeless will be particularly grateful for it in winter.

Parliament also voted to make 2020 a year of national cohesion, meaning cohesion with the parts of the former Empire. Votes like this have become particularly easy to win as the ruling Fidesz party was able to change the constitution which was in part helped by giving citizenship to Hungarian speakers who live in other countries.

Whilst some may have applied to get a Schengen passport and the easy US visa that comes attached, others do want to be part of a greater Hungary.

So, populism aside, why is Triannon still a burning issue in Hungary when Germany (or at least West Germany) and Austria came to terms with their losses?

Judit puts it succinctly: ‘People here didn’t get time to grieve. The regime just required them to just forget.’

In the recently spruced up little park which adjoins the garden, an old couple pick figs from the low hanging branches. They had been planted a few years back by a neighbour. Judit, looking a bit agitated – she still hadn’t set to work on the herb patch. Nevertheless, she took the time to talk to the old couple.

Amongst the figs there were also some new bird boxes. Judit sighs, ‘They look good but they are no use’.

‘The local government put them up but birds don’t just need a place to nest. They need things to eat, other places to fly to.’

She has a point, Pest, the eastern part of Budapest is densely populated and there is little greenery.

I wonder if that also isn’t the problem with Massolit. Like the nice little park that’s too isolated for the birds, isn’t this little liberal oasis too isolated from the rest of Hungary.

Shouldn’t the people here be out in the rural heartlands, like the old missionaries who went out on a cart with a bible. Shouldn’t these guys be out persuading the disgruntled masses to discard Victor Orban’s so called ‘illiberal state‘?

Perhaps they could take along a few enlightening books. Better still, take some coffee and cake. George Orwell found out on the Aragon Front in the Spanish Civil War the best recruiting tool was buttered toast. But I stow that thought and instead ask Judit what she has learned about the people who come to the cafe.

‘You know the first thing most people ask me? Do you have a charging point for my phone and my laptop. When we started eight years ago, people used to come in and talk to each other. Now they just stare at their devices. They are in their own bubbles.’

Bubbles within a bubble?

It must be a bit annoying creating such a nice place and then see everyone who comes in just glued to their screens. But maybe her annoyance that people aren’t chatting to each other in the cafe and my annoyance that they aren’t preaching to the masses are both misplaced.

Who knows what these guys are doing and who they are chatting to.

Meanwhile, I can sit here, enjoy the shade and learn more about where I am heading by reading a good book, with a nice slice of cake and coffee.

If only I had somewhere to charge my phone. 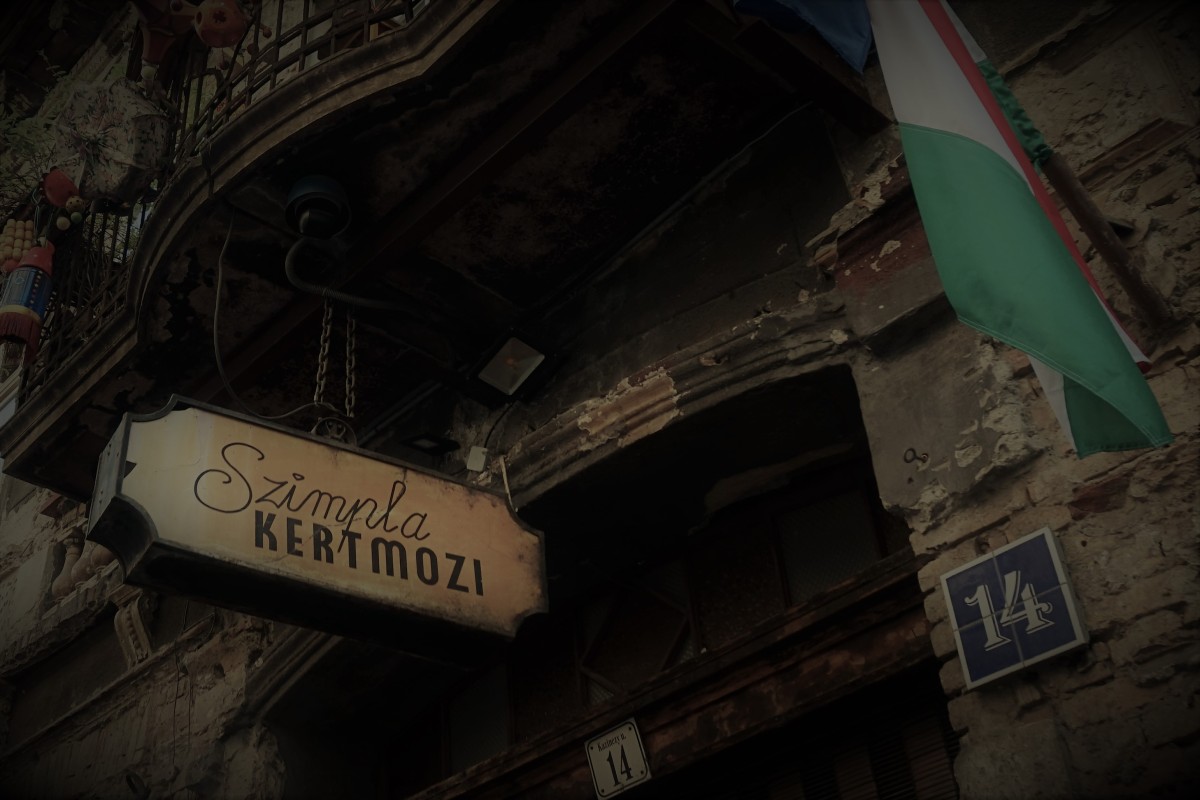 I love Budapest’s ruin bars and in particular, Szimpla Kert, the oldest and arguably finest example.

Converting a dilapidated old factory into a hip bar isn’t anything new. But the idea of renovation by making everything worse is.

Arguably, the apparent ruin is more of a trompe l’oeil. The buildings are structurally sound and filled with greenery, quirky art and every surface is available for you to leave your own mark.

And what’s particularly appealing is that the alternative approach isn’t just skin deep. With a farmers’ market and shop, sustainable urban living is being actively promoted. You can even buy yourself a Victor Orban candle to burn.

So what’s the problem?

It was my second time in the place that I noticed something not quite right.

On my first visit, I had been looking at the place. Now I was used to it, I started looking at the people in it. They all had something in common. I confirmed my suspicions when I spoken to a member of staff. Just about everyone was a tourist. Locals go to the more conventionally decorated Kisüzem.

Everyone, like me goes home with the impression that despite all the talk of Hungary being an illiberal state, it’s actually fine and you can be who you like – perhaps living around the corner in a secessionist apartment with flaky paint and high ceilings.

It’s a wider problem with Budapest’s Seventh District, the old Jewish quarter. The graffiti, buildings covered in stickers, vegan street food and an air of ‘anything goes’ might be a pull for some but shows a nervous local population that anything could happen without the guidance of the current regime.

So should ruin bars close?

Of course not. But visitors should not be allowed to come away with a feeling that all is OK when it isn’t. Perhaps first drinks should be free but only if you can give three examples of why the EU Parliament is seeking to apply sanctions.

However, there is an alternative. Go to Szimpla’s sister bar in Berlin.