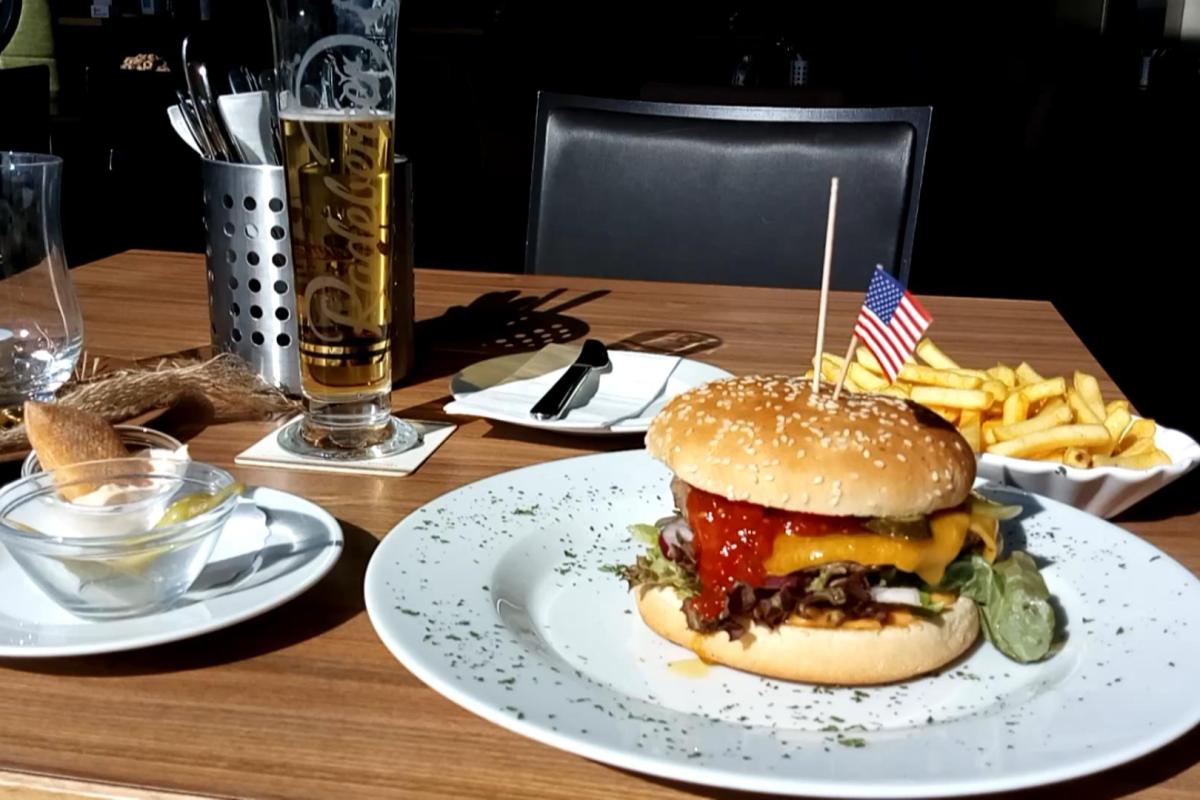 “The History of every major Galactic Civilization tends to pass through three distinct and recognizable phases, those of Survival, Inquiry and Sophistication, otherwise known as the How, Why, and Where phases. For instance, the first phase is characterized by the question ‘How can we eat?’ the second by the question ‘Why do we eat?’ and the third by the question ‘Where shall we have lunch?”

Douglas Adams, The Restaurant at the End of the Universe

I’m at Terra Nova, a restaurant in Germany’s Ruhr Valley.

The staff are friendly, the music’s fine and there’s a reasonable selection of drinks with complimentary nibbles. The American-themed menu makes a change from curry-wurst, so it’s nice to order a burger and fries.

Outside there’s a sun-deck and beyond that sun-loungers and parasols. To the side, there’s a kids’ adventure playground for them to amuse themselves while you kick back, relax and take in the view… of the Hambach opencast mine.

That’s quite a USP…

Terra Nova makes a point that all the food is freshly prepared so there’s plenty of time after ordering your burger, chips and beer to take a stroll to the sun loungers while they make it.

Approaching the pit is, in the truest sense of the word, awesome. You have no sense of what’s in front of you until you are near the brink and then up looms one of mankind’s largest achievements. A bloody-great-big hole. The sense of desolation was compounded by a raging gale.

The sun loungers, that looked quite inviting from the restaurant, now seemed absurd. They are understandably made of steel and bolted well down, which is why in this staggeringly strong wind they are still here and not flying towards Belgium.

It’s a struggle to keep your eyes open on a day like this and sure enough I get a bit of grit in my eye and retreat back to the restaurant.

Since it opened 6 months ago, the owners have had plenty to contend with. The storms in February caused havoc outside and it looks like large parts of the sun-deck screening have had to be replaced.

Back indoors, all the adversity is gone and wind is replaced by the soothing muzak.

No burger yet, so it’s time to learn some fun facts:

That still leaves some questions unanswered:

But these thoughts are put aside as the waitress brings my grub.

My burger arrives sporting the star-spangled banner and is pretty darn good.

As disconcerting as it is having a ring-side seat to watch the frittering away of the climate, it’s good that this restaurant is here.

The mine is open for all to see what is going on. It isn’t a dirty secret hidden away in pipelines running along seabeds from oil-rigs or the shale sands of the frozen north.

How easy would it be for us to practice cognitive dissonance if high street fashion stores had their sweatshop child labourers sleeping in the changing rooms or restaurants had petting zoos where you can meet your meal first.

With a clean plate and empty beer glass it’s time to head out into the world outside feeling rejuvenated and ready to make a difference. 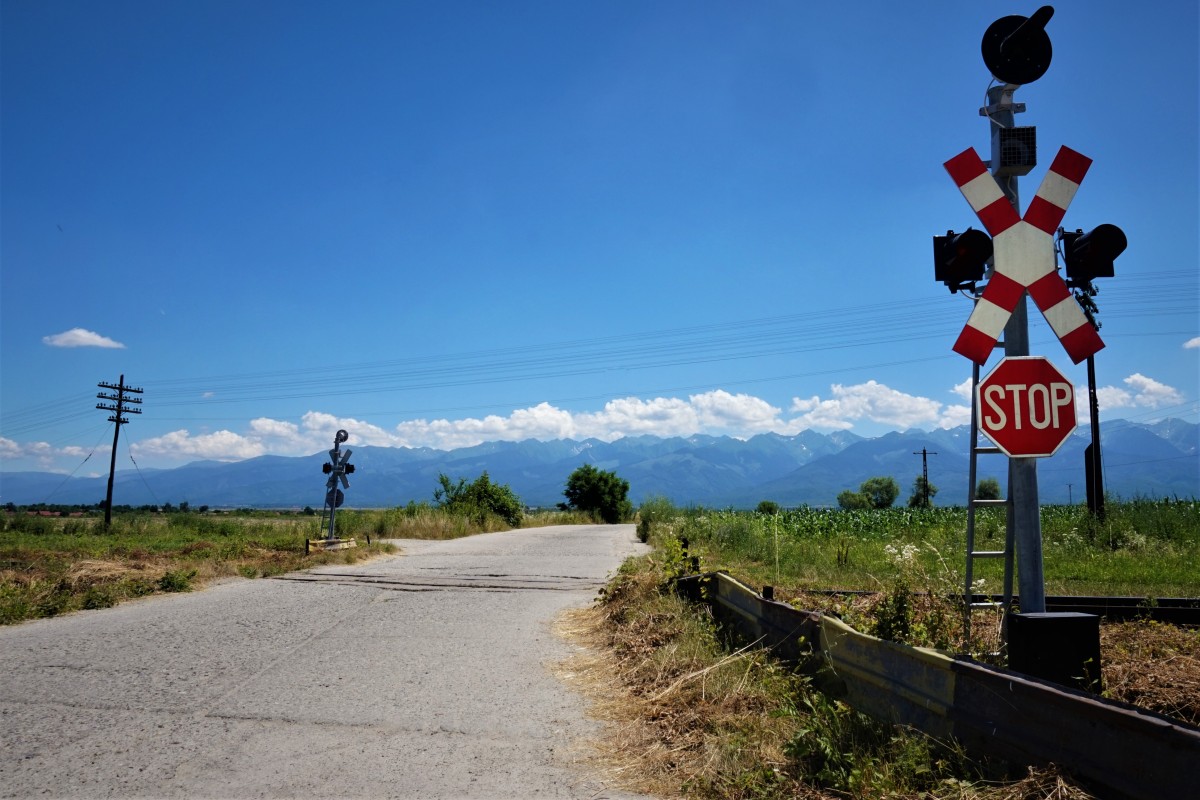 At a time of climate emergency we want more people to use trains rather than planes, so we need to make looking for journeys as easy as possible. But that isn’t enough. We need to make it fun. Why?

Let me take you on a journey.

I want to show you some of the obstacles that prevent some people from choosing to travel by train across Europe and how they might be removed or even turned into features.

Before we set off, please pay attention to the following information.

Let’s start with one of those cohorts and a story:

My other half and I were sitting in front of the laptop on a dark winter’s eve.

We wanted sun – no, we craved the sun.

We both knew that trains were the ‘right way’ to travel, but we looked at the practicality of taking a train down to somewhere sunny. We saw how long it would take, how much it would cost and immediately started looking at Skyscanner for a cheap flight instead.

Once we got a vague idea of where and how much, we looked at villas and we booked both. Closer to the time we hired a car and airport parking. Finally a week or two before we set off, we started looking at things to do in the area.

To nudge the ‘independent family’ cohort from planes to trains, this ordering needs to be disrupted. Why?

Because planes are cheaper than trains. The nudge will fail at point 1.

Actually, the perception of being cheaper is probably just that thanks to the Ryanair effect, where costs come in dribbles. It looks like your flight will cost 1 Euro but that doesn’t include a seat… or the costs incurred in points 2-5.

Asking people to take a more leisurely journey to their sunbed by the sea means regaining the idea that travelling to somewhere might even be the best bit of the holiday.

At present, this requires a bit of imagination and a lot of Googling, so for nudging to work, the things to do en-route need to leap out at you. They have to be in your face and appealing enough for you to to trade a few days on that sandy sunbed.

It’s also crucial that the savings you are making are also in your face – a kind of reverse Ryanair effect. Look what you are not spending on points 2-5!

When searching for some sun in southern Europe, we need to see that on the way we could be spending an hour or two e-scooting around Aachen, cheese skittling in Edam or escape rooming in Liege?

This involves a little bit of clever technology. New algorithms that plan in stops to do fun things on the way.

The good news is that the technology and companies to deliver it are already here.

One example is TripAdvisor. You can use their app to pick what you want to do and when, but at the moment, all they can do is offer up things to do at a destination because they don’t have the mid-point data.

Having the technical infrastructure in place, could lead to a whole new form of tourism. Instead of focussing on endpoints, with the bits in the middle being flown over, those parts could become holiday highlights.

So, the ‘independent family’ cohort could be nudged by integrating transport information and allowing companies like TripAdvisor to merge it with other activity data.

Europe is old, and by that I mean it’s population is living longer than ever. Nearly 20% of Europeans are over 65 and this is a cohort with time on their side. At present, algorithms for journey planning focus on speed or cost.

Integrated data can allow more sophisticated algorithms to be devised which cater for people who can take a leisurely ‘cruise’ around the treasures of Europe.

By making surfing for trains easier, we’ll be breaking down the technical barriers that prevent older people from finding their freedom on the rails. Let’s give them easy apps backed up by big data to make them a generation of liberated silver surfers.

What about other cohorts?

I’m going to make a sweeping statement. I think what holds true for ‘independent families’ and ‘the silver horde’ will also hold for the bulk of other holiday makers, including the package holiday companies that serve some of them. However, I may be wrong and I’m happy to work that one through with anyone who is willing to challenge me to a game of chess in a park in Gdansk – just tell me how to get there by the most fun route.

So let’s take a break from the holidaymakers and visit another cohort.

This year I’ve met and travelled alongside people who need to cover long distances and have made the choice to use the train. I’ve also been doing it myself with mixed results.

So, how can integrating train (and other transport) data help with making the right services available for business users?

A valuable resource here is the feedback from searching.

Google, Facebook, Instagram and the plethora of other new technologies are free because of the data fed back from people using them.

By being able to gather information on what journeys are being looked for and booked, we get to learn about where the demand is and how services can be modified to meet it. At the moment, this can only be done with surveying and guesswork.

Smarter routes and value-add services like meeting rooms can be planned when we know what journeys are required.

A lack of data isn’t the only issue – many trains run at a loss, and are provided by government because of the economic value they add. Data could help make the case for what services would get used to add more economic value.

By the way, all this additional data gathering might feel quite insidious but it’s a Faustian pact we’re already making, so how about we use it to mitigate against climate change instead of liking each other’s cats on Instagram?

How easy will integrating European transport data be?

If it’s like any of the other integration projects I’ve worked on, I doubt it will be much fun. It will be painful at times, but it will be a step in the right direction.