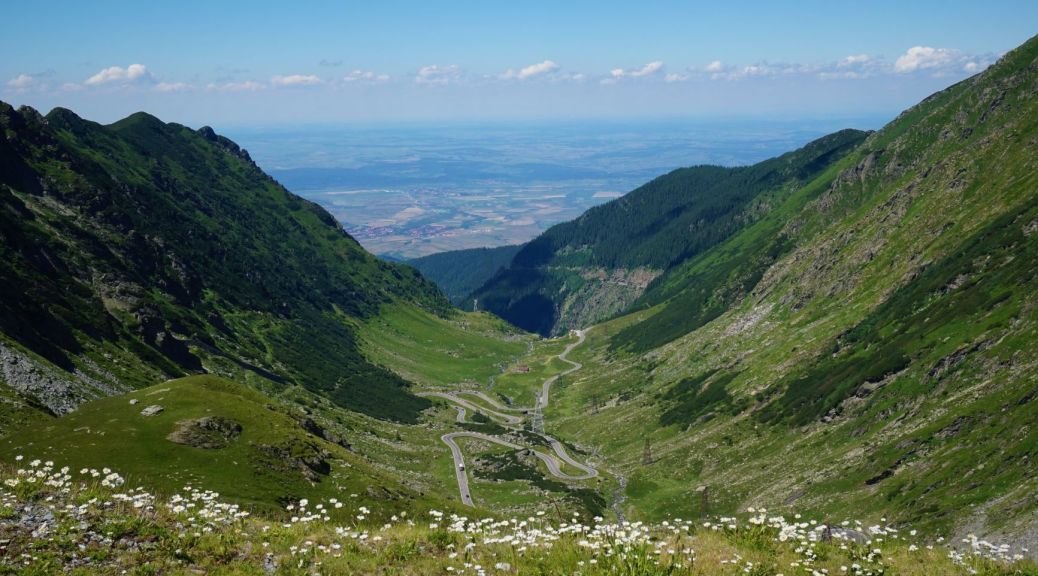 I live life in the slow lane, especially now I have an electric car. Battery anxiety means never accelerating faster than a three-legged donkey.

So what would I make of what Jeremy Clarkson called the best road in the world?

I went to Romania’s Transfăgărășan to find out.

My first glimpse of it appeared whilst still deep in the Carpathian Basin. I turned a corner and then caught my first sight of the mountains marking the edge of Transylvania.

In the flutter of anticipation, I felt like I should be providing a Clarkson-esque commentary on the relative merits of my hire car. I also wondered if I should have splashed out and hired something a bit sportier than a VW Polo.

That flutter dissipated as the miles passed – driving through village after village, past horse drawn carts, over train tracks and dams with the mountains only seeming to grow inch by inch. I realised that when I first saw the mountains, I wasn’t close, they were just very big.

But eventually, I did get to the start of the Transfagarasan.

I soon passed a performance car going in the opposite direction and felt the roar as he puts his foot down.

Then more cars came and I started to pass parked cars on either side stopping to take a picture, have a pee or buy little roast chickens.

A kilometre from the summit, the traffic came to a standstill. Tour buses turned the narrow path between the lines of parked cars into a single lane road and we all crawled to the top.

For the first time in my life, I felt sorry for the drivers of performance cars especially the ones with foreign number plates. How far had they come to sit in the sort of jam they could have had back home?

At least they could stop trying to drive fast and instead look at the nice scenery, which then begs the question. What’s the point of driving in dramatic places if you can’t take your eyes off the tarmac? Is driving on high bendy roads without falling off really that much fun?

But then I suppose it’s about chemistry. The search for the ultimate adreneline rush. I realised that the first performance car driver I came across had floored it out of pure fustration, after finally getting to an open, albeit flat and straight road. But even frustration produces adreneline, so he got what he came for.

This is where being a natural slow driver helps. By not getting riled by traffic the body is free to release a nice dose of seratonin brought on by being in such a special place.

My fellow traffic jammers spend the time trying to work out what’s missing.

The road had been ordered by the paranoid president Nicolae Ceaușescu in response to the invasion of Czechoslovakia 1968. Ceaușescu felt vulnerable and wanted to be able to move armed forces into Transylvania quickly. Building it was hard and dangerous. Offically, 40 people died building the road, but accounts of those who built the road have subsequently been pieced together and the true count of lives lost is into the hundreds.

So given the monumental achievement, where is the monument or memorial – the physical thank you?

Perhaps the road in itself is the monument.

After crawling to the summit and through the Bâlea Tunnel, the road cleared as I passed from Transyvania into Wallachia.

At the bottom, is the lake created by the Vidraru dam.

As well as the shameless Dracula tourist stuff.

I got some sweetcorn, coffee and breadstick rings called covrigi.

It was while I was munching on the covrigi that I had a nagging feeling. I had been on the ‘best road in the world’ but had I really experienced it? If the UK’s M25 was traffic free, wouldn’t become the best circuit in the world?

I looked at the satnav for a route back to where I was staying in Transyvania. There were two recommended routes. They involved going round either side of the Southern Carpathians and in both cases it would be quicker than going back over the top. If only Ceausescu had had Google Maps, he could have chanelled that effort into things that might have stopped him getting lynched.

I decided to let the crowds on each side of the mountains go home and then I might just get a clear run.

I went to refuel the car for my second go.

As the sun dipped behind the hills, I set off again this time heading north.

In the foothills, I got stuck behind a Dacia Logan weighed down by a roof box which slowed to a snail pace on each incline. There were hardly any places to overtake and I didn’t want to risk meeting a frustrated driver the other way.

Then we were joined by an Audi, who judging by the distance between him and my bumper, really wanted to get past. Overtaking both of us was near impossible.

This was great. Three of us in a pack, just like Top Gear. All we needed were walkie talkies, bad haircuts and some guitar-based rock on the stereo.

And then the magic was broken.

We came to a straight bit of road. The Audi changed down and left the two of us in a plume of oil smoke or was it frustration-fueled adreneline? I also overtook Captain Slow and made my way back up alone.

The traffic had all but gone. There were no queues and I was at the summit in no time. Now was my chance to do this iconic route properly.

Then I got back in my car and prepared to leave my comfort zone with the adreneline pump primed.

However, after a couple of bends I got stuck behind another slow driver. Then BMW joined behind. We were back in a pack of three and as I looked at the lower hairpins bends, I could see another pack of three. A pattern emerged. One slow driver followed by a cautious driver with an impatient petrol-head stuck fuming behind the two of them.

I pulled over to leave my pack and waited for some space to develop. After a while I knew I would have a clear run and set off.

But even with this chance of a lifetime, I knew couldn’t go really fast. Who knows who would be coming the other way. I value living too much so I followed the pattern of my life and went at a sensible speed.

How lucky I did.

As I got to the tree line, a wild bear felt free to lollop across the road in front of me.

And so instead of adrenaline, I made do with a little dose of nature-induced serotonin.